(b) “People of different religions would be sitting outside waiting for him.” Who is referred to as him’ ? Where did the people wait ? Why did they wait there What would happen thereafter ? [1 + 1 + 2 + 2]

(d) What were the three questions the Tsar wanted to be answered ? Why did he need the answers ? Why was he dissatisfied with the answers given by the scholars and learned men ?
[3 + 1 + 2]

2.Answer any tuwo of the following questions, each in about 100 words :

3.Answer any one of the following questions in about 100 words :

(b) How did Charandas plan to rob the wealthy merchant’s wife ?
[6]

(i) The hermit was digging the ground.
(Change the voice)

(iii) There was a very old mosque in our locality where my father would take me for evening prayers. (Split into two simple sentences)

(iv) The poetry of earth is never dead. (Turn into an affirmative sentence)

(v) He answered in a low deep voice.
(Use the underlined word as a noun and rewrite the sentence)

(vi) The sun’s rays were bright. They lit up the valley.
(Combine and turn into a simple sentence)

(c) Correct the error in the following sentence by replacing the underlined word with the right one from the options given below :
1 x 1 = 1
I would say my was a very secure childhood.
[ (i) I  (ii) me  (iii) mine ]

5. Read the following passage and answer the questions that follow : In 1955, with the release of his first feature film, ‘Pather Panchali’, Satyajit Ray became an internationally acclaimed filmmaker. His reputation further surged with the completion of the ‘Apu Trilogy’ (1959), considered by some critics to be the greatest cinematic set ever made. By the time of his death in 1992, Ray had made twenty-nine features and seven documentaries and shorts. Working with simple tools, he fashioned tales, both visual and literary, that were straightforward in their presentation yet richly complex in their capacity to suggest multiple meanings and interpretations. He wrote his own screenplays, handled the camera, and did his own editing work as well. After 1962, he began scoring music for all his films. Trained as a graphic artist, he sketched out each scene before shooting and designed the posters that publicized his new releases. Satyajit Ray was born on 2 May 1921 in Kolkata to Sukumar and Suprabha Ray. He was born into a distinguished family of artists, writers, musicians, scientists, and physicians. His grandfather, Upendra Kishore, was an innovator, a writer of children’s storybooks (popular to, this day), an illustrator, printer, and musician. ‘Ray’s father Sukumar, trained as a printing technologist in England, was Bengal’s most beloved nonsense rhyme writer, illustrator, and cartoonist, He died when Satyajit was only two and a half years old.

(i) Why did Ray’s reputation surge after 1959 ?
(ii) Why was Satyajit Ray’s father famous ?
(iii Mention any three activities Ray undertook for his films, apart from directing them.

6. (a) Write a report on the seminar Plant Tree, Save Life and Water’ organised by your school. The report will be published in your school magazine. Mention the roles of the students and teachers, purpose of the seminar, participation and response, and so on.
( Word limit : 150 words)
[2 + 8 = 10]

No one can deny the importance of history in our civilisation. No study of present is complete without a reference to the past. If we go to history for a mere catalogue of facts and a record of annals and dates, we will be mistaken. We will only know the surface reality. The proper study of history lies in the relation of the past with the present; how the present relates to the past, and what happened in the past has a profound connection with the present. It is from history that we come to learn how misfortunes could have been avoided or how people could take lessons from good things. Such knowledge would surely help in the progress of civilisation. The real understanding of history lies in this.
[ 129 words] 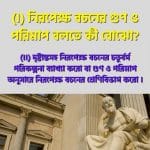